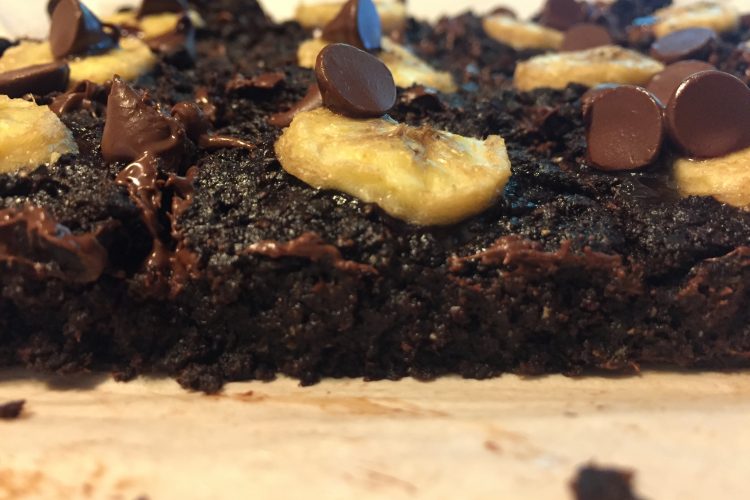 There’s always money in the banana stand, and there’s always a bunch of old bananas in my house. Why can’t we ever go through an entire bunch before they go brown? Fortunately, we use bananas enough in baking that I look forward to them getting brown spots. We have Meu’s Guilt Free, All-Natural, Healthy Banana Bread Bonanza on regular rotation (as should you), but if you need a rich, chocolatey fix, try these Easy, Extra Fudgy, Vegan Banana Brownies.

Have you ever had a chocolate dipped banana? Imagine that, but in gooey, fudgy brownie form, and you have these vegan banana brownies. Add a scoop of non-dairy ice cream and you have an easy peasy vegan banana split. You can’t go wrong with chocolate and banana.

Bananas lend a natural sweetness to the bitter cocoa powder used in these brownies, and they provide moisture in place of eggs. Most cocoa powder is vegan, and these brownies have a good amount of cocoa–they are not for the faint of chocolate heart. The optional addition of vegan bittersweet chocolate chips gives a variety in cocoa flavor and adds another touch of sweetness.

There are a few other ingredients that make our Easy, Extra Fudgy, Vegan Banana Brownies extra special: coconut sugar and whole wheat flour. Coconut sugar, or coconut palm sugar, is a vegan sugar that has a similar appearance to raw sugar and a slightly molasses-y, nutty flavor, like brown sugar. I love using brown sugar in brownies; any time I can add caramel flavor, I do. The natural nutty, caramel flavor of the coconut sugar complements the banana and cocoa flavors in these brownies beautifully. (Keep in mind that coconut palm sugar is still sugar, and it should still be consumed in moderation.)

We’ve also swapped all-purpose flour for whole wheat flour, again for the nuttiness it adds. Whole wheat flour adds a toothsome, hearty texture to these brownies. They are fudgy beyond belief, but they won’t fall apart in your hands.

How Do You Make Vegan Banana Brownies?

Making these vegan banana brownies could not be simpler. You know I love recipes that use as few dishes as possible, and if you play your cards right, you don’t need more than one bowl (at most, you need two). Here’s the one-bowl game plan: start by melting your butter in a large glass bowl. To that, add a very ripe banana. The riper the banana, the sweeter and more-banana flavored your brownies. Mash the banana with a fork in your bowl along with the butter.

Next, add the rest of the ingredients (save the chocolate chips) and stir. Seriously, that’s it! I’m going to make a confession here, and you can either judge me for it or steal the idea (or both). This recipe needs either hot water or hot coffee to create the right consistency. Coffee makes chocolate taste even chocolatier, so that’s my preference. But don’t worry, if you don’t like coffee, you won’t taste it. If you don’t have coffee on hand, water is fine. Now the confession: I am a daily coffee drinker, so I always have a pot of coffee in the kitchen. If I’m making these brownies just for me and my husband, I’ll just take two tablespoons of coffee from my mug and call it a day. There it is. Feel free to judge.

The vegan chocolate chips, if using them, are put in last. When you’re stirring your batter and you have about one stir left before all of your ingredients are incorporated (in other words, you’re one stir away from all of the flour being mixed in and no longer visible), add the chocolate chips, then give it the last stir.

Even with the added water or coffee, your batter will still be pretty thick. It should be a good, spreadable consistency. Brownies don’t need any decoration, but some banana slices and extra vegan chocolate chips give them a nice zhuzh. After a quick trip to the oven, you’ll have your hands on fudgy, delicious, vegan banana brownies.

Fudgy, delicious, and vegan, these one-bowl banana brownies use coconut sugar and whole wheat flour to add sweetness and nuttiness to the rich cocoa and banana flavors.

Did you make this recipe?

Lu & Elle
We are bringing plant-based, healthy cooking to the midwest. Our vegetarian or vegan recipes are occasionally sugar-free and gluten-free, but they are always delicious!
Processing…
Success! You're on the list.
Whoops! There was an error and we couldn't process your subscription. Please reload the page and try again.